Seven Hills is pleased to participate in the Department of Developmental Services' Urban Youth Collaborative Program (UYCP), hiring summer interns to assist with the care of individuals with developmental disabilities at our program sites. For over 22 years, more than 300 high school and college age youth have contributed to the lives of many people in our care through the success of the Urban Youth Collaborative Program.

This summer has been no exception. During a recent celebration and awards ceremony at the State House, over 220 interns, representing 21 programs throughout the state were recognized for their support of individuals with developmental disabilities throughout this summer. Proudly, every name and quote mentioned in the Mass Health and Human Services Blog article below is from a Seven Hills intern -- Jorge Centeno, John Cronin, Theresa Rook, Amanda Zamis, and Jaime Bailey.

Photos
In the photo above, Seven Hills interns pose with DDS Commissioner, Elin Howe, and Jerry Scott, EOHHS/DDS EEO Administrator and Director of the UYCP Program during the State House event on August 13, 2015. In the photo below, Seven Hills Peer Leader, Julia Knowles, delivers her speech during the event.  Julia worked with Jean Des Roches in the Assistive Technology program this summer. 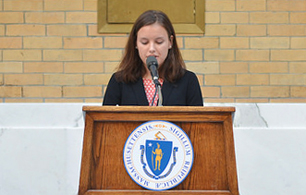 The Baker Administration honored members of the Department of Developmental Services’ Urban Youth Collaborative Program (UYCP) during a celebration and awards ceremony inside the Great Hall at the State House earlier this month.  Over 220 interns, representing 21 programs throughout the state, have supported individuals with developmental disabilities at provider agencies, state operated programs and developmental centers throughout this summer.

The UYCP, which began in 1992, introduces young adults to the field of Human Services.  The program helps to build an experienced workforce for the future while supporting efforts to reduce the stigma associated with developmental disabilities.  DDS manages Urban Youth Collaborative internship programs in Boston, Cambridge/Somerville, Fall River, New Bedford, Fitchburg/Leominster, Lawrence, Lowell, Quincy, Brockton, Springfield/Westfield, Holyoke/Chicopee, Worcester, and the Central /Western region of the state.  Since its inception, over 4,000 interns have participated in the UYCP; with many former graduates now actively working in the human services field.

The State House event was lively, informative and moving as many student interns took to the microphone to share their UYCP experiences.  The common theme amongst most students was how much they learned not only about themselves, but others as well.   As Jorge Centeno stated, “My experience during this time working with individuals has been wonderful.  While working with them I made a lot of connections with the individuals.  For me, the individuals teach me more than I thought they would, and that’s something I’ll never forget.  Honestly, they will always have a place in my heart.”

Similarly, John Cronin noted, “The internship has taught me, and opened my eyes so much.  The individuals I work with have never failed to make me laugh.  They have showed me the lighter side of life.  They have challenged me, and shown me how passionate I am in making a difference in another’s life.  I came in wanting to make a difference in other people’s lives, but the people I have worked with made a bigger mark on my life than I have on theirs.”

Through their heart-felt words, the UYCP interns dispelled some notions that people may have on the youth of today.  These young people were serious, dedicated and passionate about their work.  Theresa Rook, a second year intern, spoke of how the program “has shaped me into a better person, and I am very thankful to be here today. Some of the greatest impacts I have from my experience the past two summers are things my individuals have taught me.  They teach me to love every moment of life and to always look at positive qualities in people.”

Like Theresa, many of the interns are veterans of the program.  Including, Amanda Zamis who just completed her third summer in UYCP.   Amanda is entering her senior year at the University of New Hampshire majoring in Communications Sciences Disorders or commonly referred to as Speech Therapy. She is convinced that her UYCP experience will help her in her future career, noting that, “the Urban Youth Collaborative Program has confirmed my desire to continue to study and work as a speech therapist when I graduate.”

Like Amanda, Jaime Bailey has spent the last three summers in the UYCP.  She spoke of how her family is a home care provider to an individual whom has lived in her family’s on-suite apartment since Jaime was three years old.  Jaime noted that this particular woman was part of her family household and she knew her well; or at least she thought she did.  Through the UYCP, Jaime now saw the woman not only at home, but at work as well, where a whole other side of the woman emerged.  She described this woman as easy-going at home, but energetic and boisterous at work.  Thus, she noted that all people can and do have many sides.  She used a quote from Shakespeare’s As You Like It, to illustrate her point.

“All the world’s a stage,
And all the men and women merely players,
They have their exits and entrances,
And one man in his time plays many parts.”

Jaime used her UYCP experiences and Shakespeare to beautifully sum up that, “all the world is a stage for every person, no matter their abilities or disabilities.”

Following the speeches, all 226 interns received a certificate of completion form DDS Commissioner Elin Howe.  The event concluded with the presentation of three awards; the Current Service Award, the Steven E. Collins Leadership Award, and the Paulette Anjorin Community Service Award.  The Current Service Award is given to a current UYCP participant that has shown excellence in the program.   The winner this year was Bertholyn (Tony) Alexandre.  The Steven E. Collins Leadership Award is named after Steven E. Collins, the former director of the Human Services Coalition and a tireless advocate for people with disabilities.  The winner this year was Sokha Sambun.