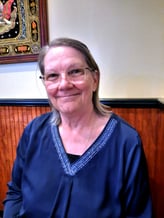 Dawn Lane discovered her work’s passion in 2012, when she rerouted her career pathway to the Young Parent Living (YPL) Program at You, Inc. Dawn was completing her Human Services coursework at Quinsigamond Community College, when she began interning at YOU, Inc.’s Alternative to Lockup program. She continued volunteering after earning her degree, but what she really needed to earn was income. Upon suggestion, Dawn applied for a relief staff position at YPL, which provides homeless young parents, or those at risk of becoming homeless, with a safe, supportive environment where they learn to care for their child and themselves. To Dawn’s surprise, she realized she found her niche and began earning the young parents’ respect through her no-nonsense “say what you mean and mean what you say” rule of support backed with her warm and welcoming heart. In 2014, Dawn was promoted to residential counselor. Four years later, she committed to the program 24/7 as a house parent and managed everything including the plumbing of the kitchen sink. One of the biggest challenges for YPL staff is helping to break the transgenerational cycle of trauma, homelessness, and teen pregnancy. Growing up in “the system” can create a sense of entitlement in the young women for which this oppressive cycle becomes the norm. Yet, YPL supports each young parent’s vocational, educational, and personal goals that lay the groundwork for hope. In October 2021, Dawn became a residential supervisor of the night shift. Officially on duty Sunday – Wednesday, 11pm to 9am, Dawn’s off-duty accessibility proves that her heart is truly in sync with the program. And what sends her heart soaring, is when a young parent seeks Dawn “after their darkest night and shares that moment when the next day breaks and the sun shines its brightest.” These breakthrough moments are shared with Dawn because she believes that every young parent can shine their brightest when they break through the cycle to a life of independence.