Staff honored at Annual Fall Board of Directors Meeting

Staff honored at Annual Fall Board of Directors Meeting 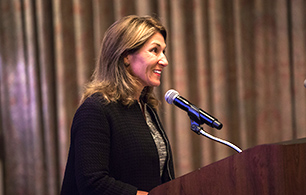 Seven Hills Foundation held the annual Fall Board of Directors and Advisory Trustees meeting and dinner at the Beechwood Hotel in Worcester on Monday, September 18.  Over 200 guests were in attendance including members of Seven Hills staff from all 12 affiliates. At the meeting, five of those staff members were honored as Seven Hills Heroes for their actions in saving lives while on their jobs. The five members honored were: Isaac Njoroge, Kaitlyn Dias, Tiffany DeMassini, Walmir Arteaga, and Vicky Gomes. Congratulations!

With Massachusetts Lt. Governor Karyn Polito in attendance, Dr. Jordan outlined his forecast of trends for our sector, in which he strongly emphasized areas of critical need for the Health and Human Services Workforce in Massachusetts, while focusing more specifically on our Seven Hills staff members. Dr. Jordan highlighted the need for increasing our clinical training for staff as the acuity of the people we support continues to increase. The exceptionally low unemployment rate in Massachusetts, currently below 4% is making the recruitment and retention of Direct Support Professionals extremely difficult.  Dr. Jordan called for the salary not to be $15.00 as many are supporting as the new minimum wage, rather a $22.00 rate for DSPs to help bring their salary in line with the critical importance of their work with human beings. “I promise you that I will continue to sound the charge and fight for a $22.00 an hour rate for our DSPs. Even if it takes a few years, we must get to this level,” said Dr. Jordan. Rising healthcare costs and the cost of insurance was another trend he noted. “Seven Hills, this year, paid 70-74% of our employee’s health insurance costs and we will work to continue to absorb the skyrocketing increases in health insurance to protect our employees,” said Dr. Jordan.

Dr. Jordan then welcomed Lt. Governor Karyn Polito, who is also a longstanding member of the Board of Trustees of Seven Hills Foundation.  Lt. Governor Polito proudly shared the U.S. News & World Report’s selection of Massachusetts as the #1 State overall ranked by education, jobs, and healthcare. She applauded Seven Hills for its role as the lead agency in the newly formed Massachusetts Care Coordination Network (MCCN) that will deliver high-quality care coordination to individuals receiving long-term services and Supports and Medicaid in three regions of the state. “Seven Hills is a reliable, meaningful partner for our most vulnerable citizens of the Commonwealth. You inspire us because you’re not afraid to challenge the status quo as we work to find ways to produce better outcomes for our 60,000 MassHealth members with complex medical and long-term support needs.” said the Lt. Governor.

The meeting closed with the honoring of four current and one former member of the Board of Directors. The late Jack Healy was honored with the dedication of a Seven Hills group home in Paxton dedicated as the Healy House to honor his leadership and service. Claire and the late Parker Swan were honored for their legacy of leadership with the naming of Swan House in Worcester. Mel Gordon was honored with the dedication of Gordon House in Worcester, supporting people through Seven Hills NeuroCare. Robin and Marion Mahar were honored with the dedication of Mahar House in Sterling, a home that they helped nurture and build while serving as longstanding members of the Board of Directors and Advisory Trustees. The Seven Hills Professional Building at 799 West Boylston Street in Worcester is now known as the Mary & Nicholas Altomare Building after the late Altomares. Mary was a member of the Board for over 35 years and her son, John Altomare, is the current chair of the Board of Directors at Seven Hills. This tribute of our dedications was a fitting way to cap an evening that highlighted service to others and an organizational commitment to excellence.