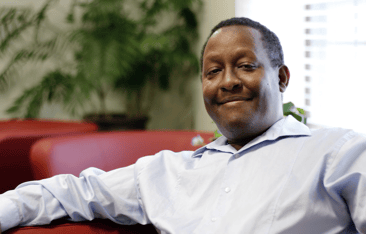 Seven Hills would like to acknowledge and thank Mr. Kungu Kungu, who has been with us for the last 15 years. He joined Seven Hills due to his interest in the field of Human Services. Kungu believes his role as Residence Director has been truly fulfilling, as he has been able to help serve communities of people that he feels have "previously been neglected" due to structural inequalities.


His favorite part about working at Seven Hills Foundation has been the continuous moral and professional support he has received from his co-workers and management. He has seen the organization expand rapidly across several countries and is excited about its exponential growth. Hailing from a family of Kenyan immigrants, Kungu takes pride in the diverse backgrounds that Seven Hills employees come from and represent. Kungu advises the youth to learn more about the field of human services and try to create a positive impact on the world - "one person at a time". We are grateful to Mr. Kungu's hard work over the years. His contributions to our community are greatly appreciated!