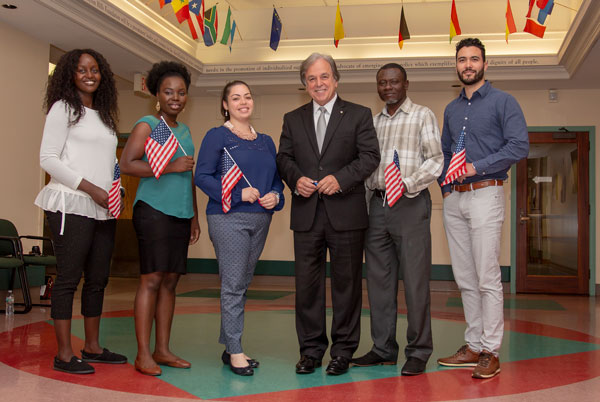 In the last decade, an average of 700,000 people per year became naturalized citizens of the United States. That's roughly one each year for every 500 U.S. residents, or one every 79 seconds. Count among these new Americans five members of the Seven Hills Family Services staff! Appearing with Seven Hills President, Dr. David A. Jordan, from left to right,

Abdul, who worked in biomedical research in England and at the National Institutes of Health before settling in Massachusetts, said, “One of the things I’m so excited about is the opportunity to openly and freely share my opinions with public officials, and of course to vote.”

Catherine, who worked in international relations in Kenya, said she appreciates the safety and security U.S. citizenship brings.

Sarah, with a background in hospitality management in her home country, appreciates the added rights she now has and fact that her three U.S.-born children now are also U.S. citizens.

Amber, who also has American-born children, said, “It’s a great relief to be able to enjoy the benefits – and the responsibilities – of everyday life in America.”

Yosdany emigrated from Cuba five years ago, where he worked in human services. “I’m very excited and grateful to at last become a true American and follow in the footsteps of the millions of others who have made this journey before me,” he said.

In congratulating the new Americans, Dr. David A. Jordan, president of Seven Hills Foundation, said, “Welcome to each of you! Seven Hills is stronger for your dedication to our mission. As American citizens – and as citizens of the world – we all have much work before us to make life better for people of all countries, cultures, and abilities.”